Okay. I just had to share something awesome with you…

Two weeks later, I got word that a teacher in North Carolina had seen my project and was inspired to have her kids do likewise: http://olivetorun.com/2013/09/19/what-would-you-say/

Before I share what happened next, I should explain one aspect of the Burning Man experience for those who have not yet been.  The drive into Black Rock City is arduous. From SLC, it’s an 8 hour drive along I-80 toward Reno.  Just before arriving into Reno, you exit onto a small road called Route 447 that proceeds north for 97 miles, deep into the northern Nevada desert.  That 97 mile drive happens along a 2 lane road (one lane each direction) and 68,000 other Burners are making the same trek. It took me from 6 pm until 3 am to complete that leg of the journey.  When you arrive at the Black Rock Desert, you can start to see the lights of Burning Man off in the distance. the anticipation is tedious yet kind of delicious. The one lane of traffic divides into 4 lanes, which divides into 8, and into 12, or something close to that. A huge swath of vehicles slowly proceed along the entrance route toward the gate. After presenting your ticket, you proceed to the final stage of the journey before finding your camp: the welcome gate. The person at the welcome gate asks you to get out of your car, and gives you a HUGE hug and says, “Welcome Home!” It’s quite a remarkable initiation into what will prove to be the most remarkable week of your year. You are given a map of the city and a schedule of all the happenings – and then you drive toward your camp.   Hopefully this next part will make more sense now.

A few minutes ago, I received the following email:

Just wanted to share a brief anecdote about the guy in this picture (Caveat: I’m 98% certain it was this guy, but with the burn… sometimes hard to be 100% on anything):

It was my third year at the burn. Our camp always does a greeter shift. This was my third. This year it was Wednesday 4am-8am. In the “organizer” role for my camp, I didn’t actually man a gate — I spent most of my time walking back and forth, directing traffic, making sure everything was moving fine.  What that really means is: anytime a line of cars started to develop I’d talk to the people in cars to keep their stress level low.

This guy was in a truck. I walked up, started talking, and it was his turn to pull up to the greeter gate.

I asked if he wanted a hug.

“Sure!” He didn’t just say it, he sort of flung it out there. At greeter gate, not everyone actually wants to get out for a hug. But this guy… He was downright gleeful on the prospect.

He opens his car door and then starts to pull pieces of metal from the passenger seat. It takes me a moment to realize…

…this guy is putting together his wheelchair.

In my cumulative 12 hours working greeter shift, he is the only guy I have ever seen who is wheelchair bound and drove himself into BRC [Black Rock City].

And he was *boisterous* — literally, filled with JOY — the entire time.

But this guy will always stand out in my mind. Because he didn’t just overcome his hardship, he straight up murdered it; and because he was so filled with joy at being home, at being back in BRC, at being part of the community.

Thanks again for reminding me, and of giving me a picture of him to keep.

Thanks so much for your project!  I hope you had an amazing virgin burn and hope to see you out on the Playa next year — my camp is the Mystikal Misfits and we are generally located at either 4:30 & B or (as was the case this year) at 4:30 & C.

Here is the photo that he was referring to: 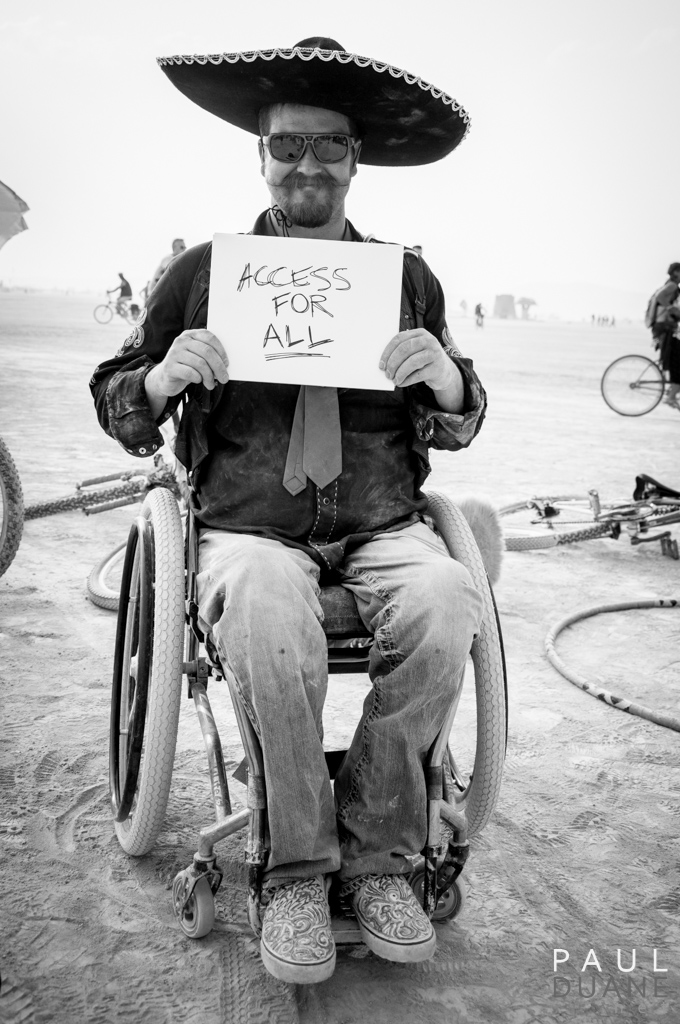 This is Stan Clawson. He is a burner from Salt Lake City, and was one of the participants in my “3 Things” photo essay. Though I’ve only met him twice, I can vouch for the abundant good energy this guy packs along. I was really moved by this story, especially because I was in such a crabby mood when I got to the welcome gate where this story took place, where Stan was so joyous.

I was hesitant to blog and talk about Burning Man yet AGAIN… but how could I get an email like this and not share it with you guys? This is just another small slice of heaven that happens out on the Playa. Stan is an awesome guy, and I had to share this. I hope it doesn’t embarrass him too much.  I am so grateful to everyone and everything that made it possible for me to experience Burning Man this year.  The moral of the story here?

Always say YES, especially to hugs and guys with cameras that want to take your picture.

You never know how your story, your smile, hug,  or experience, will help someone out.